The fuselage fabric has been painted but the fuselage frame still shows through the fabric, this is a great result and is very much like the real aeroplane. The engine has now been fitted to the airframe, but the bottom wing still needs more work before it can be fitted to the fuselage. For strength I decided to use 1. I bent the brass by hand to achieve the required shape, it is quite solid and took a bit of effort to bend. I have sat the fuselage on top of the booms to show the position in which they will sit.

I will be using four of Steven Robson brilliant spoked wheels for this build. I have fitte an axle made from 0.


The blank space in the centre is where the axle will sit on the boom and lashed on with bungee cord, the two steady arms will bolt to the boom. The support frames for the booms are made from 1. I drilled 0. The wheel set is sitting under the boom just for photo purposes.

It will eventually sit on top of the boom. These two photos show the fuselage sitting in position on the undercarriage frame which also doubles as the tail boom. Once all the bracing bars and rigging is attached to the undercarriage it will be a very strong assembly. I will be using the same 1. The undercarriage is now fitted to the bottom wing, the front cross brace adds an enormous amount of strength to the assembly. There will be a lot of rigging added to the fuselage which connects to the wings and fuselage, this will also add strength to the assembly.

The spoked wheels from Steven Robson are absolutely brilliant and very strong, they enhance the model beautifully. This is important to do BEFORE rigging commences, if this is not done the rigging will pull the booms out of alignment. CA does not have a very high sheer strength so once the rigging was completed it was a simple matter to twist the tube off using a pair of pliers. The undercarriage rigging is now completed. There is quite a bit of rigging under the aircraft but most of it is unseen with the model on its wheels.

The last photo with the figure gives a good size comparison. The spoke wheels I have used are a fraction too large in scale for this particular model but the size difference is hardly noticeable. I made the wing struts from standard wood toothpicks, the toothpicks I used are the round type, I also used a No. I firstly cut one end of the toothpick to form the top of the strut, I then scrapped the length of the toothpick on both sides with the scalpel blade, it took about 30 scrapes each side to reduce the size of the toothpick to 1.

Once this size was achieved I rounded the edges slightly with a smooth sanding stick. I measured the strut against my plan and cut it to length, then I tapered the bottom end again using the sanding stick. I cut a short length of 2. This was then flattened with a pair of smooth jaw flat pliers. A short length of the strut is exposed beyond the brass tube to fit inside the hole drilled in the bottom wing to locate the strut.

I then painted all the struts with oil paint to simulate a wood look, the struts where then placed in my heat box and allowed to dry over night. Two of the struts need to have special treatment, these two struts, one on each wing, take the control cables from the cockpit. I needed to make four pulleys which were made from small brass washers, a length of 0. I made the plate to fit the bottom of the strut from 0. Holes were drilled into the plates to correspond with photos of the original machine. The special plates and pulleys as well as all the other brass tubes on the other struts will be painted, colour to be determined..

Making the struts from toothpicks will give me the strength and rigidity I am after to support the top wing. The struts were glued to the wing using five minute epoxy, this resulted in a very strong bond. I also made and fitted all the turnbuckles to the bottom wing. These are made from 0. 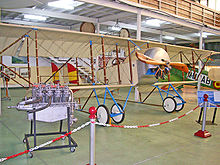 My next task is ti make the top wing, it will be quite a bit longer than the bottom wing and will have to be done in sections, I will use the same method as I used to make the bottom wing. The top wing is made up of two layers of 1. I have glued all the ribs on the top side of the wing and given one spray with filler, it will need quite a few coats of filler then sanded down to form the hollows between the ribs.

As can be seen by the photos the top wing dwarfs the bottom wing, it is over 41cm in length. It sits on the struts very nicely as shown in the last photo. I will now spend a lot of time preparing the wing, once the top is completed I will add all the ribs to the bottom of the wing, lots of sanding to do.

I have also sanded out the scallops along the trailing edge of the wing, this was done by wrapping some sand paper around a piece of dowel. The top wing is just about done, just needs a coat of satin clear. I have just positioned the top wing into the struts for photo purposes, it is not glued at this stage, as you can see it is quite a long wing when compared to the rest of the model. The spoked wheels and the laminated wood propeller stand out well in some of these photos, the wheels are from Steven Robson and the wood propeller is from Doug Craner, both excellent products.

I will now fit the eyelets to the bottom surface of the top wing. Mounting the top wing was quite simple, I placed the inverted wing on my work bench, the wing has no dihedral so a good flat surface was excellent. I inverted the model and placed it onto the wing making sure the struts lined up with the holes pre- drilled into the top wing, once everything was aligned and sitting square I placed a few drops of CA into each hole around the struts, after an hour of drying time the model was put back onto its feet.

I am using 0. This aircraft has double flying and double landing wires so rigging will take some extra time. Here is a size comparison photo. The other model is a WnW Sopwith Snipe late and as can be seen the Caudron is not a larger aeroplane considering it is a two seater. The top wing of the Caudron makes it appear larger. One side of the rigging is almost completed, as can be seen there is quite a bit of rigging due to the double flying and landing wires.

All rigging wires after they are installed are painted with Mr Metal Color Stainless, the wings are protected with paper to prevent the stainless paint flicking onto the surface. The rigging is now finished on this side of the wing. I have also added the outrigger struts which are They were made from bamboo skewers and shaped with a No.

I will add the oil paint colour to the struts in situ. Work has begun on the left side of the wing rigging, the rigging is tensioned in such a way that it keeps the wings level, so some wires need quite a bit of tension.

sa2i.net/restore/blackberry/surveillance-camera-iphone-x.php The rigging has taken quite a bit of time but I do enjoy doing it. This photo gives a good representation of the unusual appearance of this aircraft, the very small lower wing certainly looks out of place. The wing rigging is now finished. I also added the outrigger struts, the are made from bamboo skewers which have been turned down to 2. I made a hinge where they mount onto the bottom wing, this was done using one eyelet on the wing and two eyelets in the end of the strut, a short length of 0.

The top of the strut is tapered and fits into an elongated hole in the bottom of the top wing, it is all held in place with CA. The small interconnecting struts are made from bamboo toothpicks.

I used oil paints directly onto the bamboo to add colour, no base coat was needed. The double rigging wires did cause one issue, one set became a little slack so I used a soldering iron to heat the lines, this regained the tension on the two lines. If you are using a soldering iron to tighten monofilament be careful not to touch the line with the iron, it will instantly break.

Place the hot iron til close to the line you wish to tension and move the iron along the length of the line, do not hold it in one place for too long, you will see the line tension once heat is applied, as soon as you have regained tension remove the soldering iron.

The bamboo struts, monofilament rigging and bamboo outriggers have made this a very strong wing assembly. The tail plane is made from two pieces of 0. The shape was formed by taping the wing around an aerosol can, the rear of the wing was kept up from the can. The rib tapes are from 0. The rib tapes are again 0. The two rudders are shown here with the inside surfece painted, the outer surfaces will be painted green, white, red. The two inside surfaces will carry the serial number.

I made a mistake with the wing rigging, the outer struts should not have the stagger wires fitted. It was of sesquiplane layout, and used wing warping for lateral control, although this was replaced by conventional ailerons fitted on the upper wing in late production aircraft. Following the outbreak of the First World War, it was ordered in large quantities.